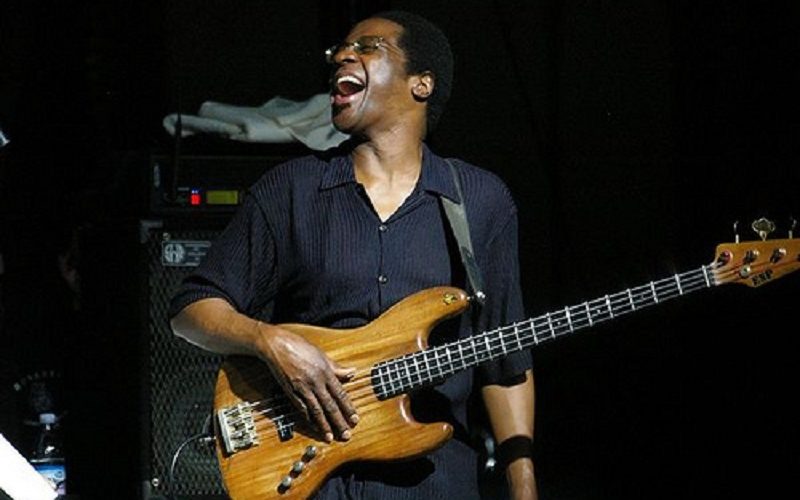 Bass guitar great Stanley Banks, a winner of multiple platinum and gold records, is a Brooklyn native and member of the Brooklyn Jazz Hall of Fame. Stanley began playing the bass while in high school, but his real musical education came from playing in the clubs along Fulton and Nostrand Avenues in Brooklyn. His professional career began with Eddie “Cleanhead” Vinson and blossomed with Esther Phillips.  On July 4, 1975, Banks met George Benson and started an on-going 44-year relationship with this jazz legend.

Stanley is recorded on Benson’s triple platinum album Breezin’, as well as other of George’s classics, Weekend In LA and The Greatest. Banks also performed with Aretha Franklin, Freddie Hubbard, Etta James, Chaka Khan, David Sanborn, and Stanley Turrentine just to name some giants of the music.

Stanley’s unsung contribution to the jazz community is his advocacy of a healthy diet with fellow musicians.  He is writing a soon to be published book on the topic of healthy eating.

Legendary Bassist Stanley Banks, a Brooklyn Native who began playing bass guitar in High School. Stanley performed 2 years with the New York City High School Orchestra and Chorus at Philharmonic Hall. He later joined 10 time Grammy winning Artist “George Benson”. He has continued to play along side him as his bassist for over 35 years, and has recorded on albums such as “Breezin”, “ Weekend In LA”, “The Greatest”, and others that have gone gold or platinum.. He has also appeared with such greats as Chaka Khan, Aretha Franklin, Esther Phillips, Freddie Hubbard, Al Jarreau, David Sanborn, Etta James, Stanley Turrentine, Manhattan Transfer, and countless others.

Stanley has performed numerous seasons on the popular TV show “New York Undercover”, with such artists as the group 112, The Temptations, Ashford and Simpson, The Four Tops,  The Isley Brothers, The Stylistics , and many others. He also has movie credits in Muhammed Ali’s,  “The Greatest”, “All That Jazz”, and “The Best Man”.

He is also a member of “NARAS” and has created a music program that takes “Live Music” back to the classrooms of  New York City. Stanley was featured in an issue of “Bass Guitar” magazine and on the cover of  David Klein’s 15th issue of “ Living Nutrition” magazine, in which Stanley discusses his 130 lb weight loss since adopting a new lifestyle as a Raw Foodist for the past 11 years . He also has been  an active member of CBJC,  (Central Brooklyn Jazz Consortium) for the past 7 years. Stanley remains a working musician that still continues to travel globally many times over.